I was digging through the dime box at my local card shop the other day.  They always have a wide selection of cards to choose from  I usually pick up some random oddball cards when I am building a stack to purchase. 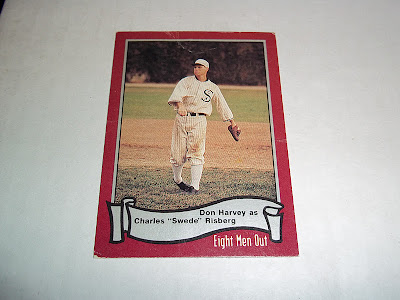 I found a couple of cards from the movie Eight Men Out.  I am a big fan of this film.  It captured the era well and had some good acting.  This set came out in 1988 and was produced by Pacific Trading Cards.  I did some research and I think this set is rather large.  I thought that the set was going to be in the 20 card range.  I believe that there are over 100 cards to this set. 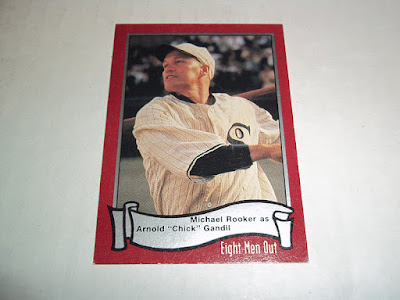 The condition of these cards is kind of shabby. The Don Harvey card has some creases.  The condition doesn't matter much to me though.

I was wondering if any of you guys have these cards for trade.  My favorite character in this film was Buck Weaver played by John Cusack.  I am also a big Charlie Sheen fan.  I would be willing to trade cards with photos of real ball players as opposed to actors playing ball players for more of these cards.

I am sure that there are some White Sox collectors out in the blog world that may have some extras to spare.  Please let me know.

Email ThisBlogThis!Share to TwitterShare to FacebookShare to Pinterest
Labels: Eight Men Out

Pretty sure I have a couple, I'll check and set 'em aside for you if I can find 'em.

Found 'em, set 'em aside with that Ichiro Heritage you requested.