More From My In-Person Auto Haul

This is a rare chance to actually read a fresh and new Platter post during the afternoon.  I usually am a night time poster.  The day time usually has work involved, so that keeps me from writing anything during the day. I also run errands or get involved in some other day time activities on my off days.

Today is different.  I woke up early with some motivation.  Some extra energy to write when the sun is still out and maybe even reach a whole new audience.  Their may be an untapped readership for the Platter that reads baseball card blogs while working a 9-5 on the east coast.  Some folks may not read baseball card blogs at 1AM eastern time when I sometimes write a post on the west coast. 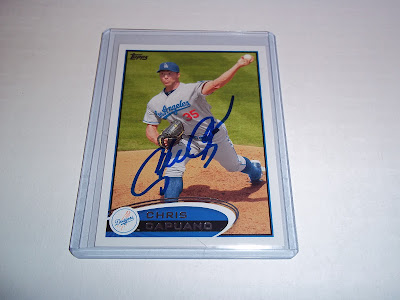 I have some more cards to show off from my trade with Dodgerbobble.  I posted some of the other signatures that I got from Dodgerbobble in my last post.  You can check it out here if you want.  It was a really great write up and I haven't stopped patting myself on the back for it.

Dodgerbobble got this signature of Chris Capuano while lurking in the shadows of Dodger Stadium hunting down ballplayers while being armed with a blue sharpie.

Capuano had a pretty solid year for the 2012 Doyers.  When he was signed prior to the 2012 season, I was skeptical of his arrival.  He seemed injury prone and mediocre at best.  Capuano totally proved me wrong.  He was a step above mediocre and provided a really strong 1st half performance. 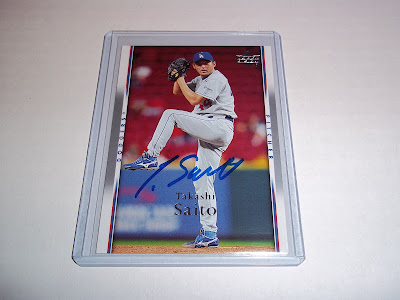 Takashi Saito, the man from Miyagi, was the Dodgers closer from 2006-2008.  Saito was signed from Japan before the 2006 season.  He arrived in America with little fanfare and nobody really knew what to expect from him.

The team needed someone to takeover the closer's role from Eric Gagne.  I don't remember too many people thinking that Saito was the best choice or even an option at all.

Saito was named the team's closer in 2006.  He dominated his entire Dodger career and pitched with such a joy on his face.  He seemed as happy to get a victory as the fans were.

Saito had a WHIP below 1 in two of his three seasons with the Dodgers.  His lowest K/9 was 10.9 and his highest was 12.3.  In his rookie campaign, Saito even received some Cy Young Award votes.

I wish the man from Miyagi nothing but the best. 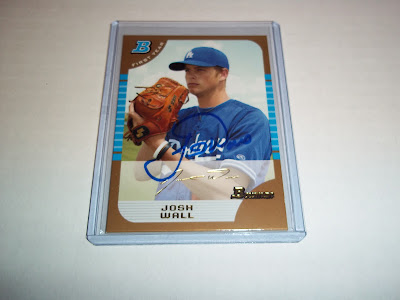 Josh Wall was the Dodgers second round pick in 2005.  He has slowly made his way through the Dodgers minor league system and was able to make his big league debut in 2012.  Wall pitched 5 2/3 innings this year.

Wall is a right handed relief pitcher that throw hard.  Every team needs and has a bunch of dudes like Wall.

Dodgerbobble is such a skilled grapher that he recognized Josh Wall.  Wall was probably wearing a baseball uniform which still will make him hard to pick out.
Posted by Spiegel83 at 11:35 AM

Those are some cool ones!

"Dodgerbobble got this signature of Chris Capuano while lurking in the shadows of Dodger Stadium hunting down ballplayers while being armed with a blue sharpie."

Great Saito auto. I've got to get one of him.

i totally agree with night owl. that saito auto rocks!

i loved when saito was closer. i remember the difference between his saves and gagne's being - gagne would blow 'em away with hurricane force heat, but saito, more often than not, absolutely baffled batters who just stood there watching strike three cross the plate - and they were rung up without a swing.
absolute 9th inning mastery.