Autographs From a Graphing Hound

Dodgerbobble has been on an autograph hunt all season.  He was getting signatures all over SoCal.  His home base was Dodger Stadium.  He was on the constant prowl and was very good at completing his mission.  Dodgerbobble claims to have gotten around 300 autographs during the 2012 baseball season.

His drive to get many Dodger autographs is of great benefit to me.  We have a continuous trade agreement, where we swap extra Dodger autos that we acquire. 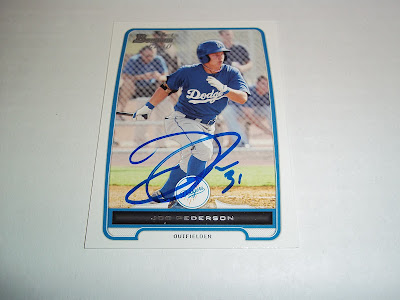 During one of Dodgerbobble's trips to Bakersfield to watch a minor league match-up between the Bakersfield Blaze and the Rancho Cucamonga Quakes, he was able to get Joc Pederson's autograph.  The Quakes are the Dodgers Single-A team that Pederson played 110 games for in 2012.

Pederson is the Dodgers Minor League Player of the Year in 2012.  He is the Dodgers best position player prospect as he has a nice blend of power and speed.  This past season, Pederson hit 18 home runs and 26 stolen bases.  That is pretty solid for a 20 year old kid.

Pederson also got to play for Team Israel that competed in the World Baseball Classic.  Pederson is from Northern California but, his Jewish roots made him eligible to play for the Israeli team.  He also got to wear this cool hat that I hope to own one day. 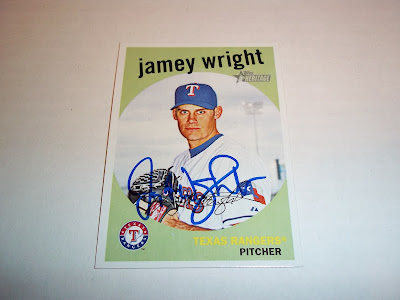 Jamey Wright looks freakish in this photo.  His eyes kind of scare me because he reminds me of a Terminator sent from the future to destroy opposing hitters.

Signatures on Topps Heritage cards always look great.  Heritage and Ginter cards are both superb for through the mail autos or in-person autos.  It is one of the selling points for me when I choose what packs to purchase.

Wright had a decent year for the Dodgers, pitching out of the bullpen.  His WHIP of 1.50 is pretty high.  I do remember him pitching out of some tough inherited jams and pitching multiple innings in order to rest the other bullpen arms.  That is valuable for a team over the course of a long season.

I also thought Wright would get released by May.  I totally whiffed on that prediction and thank Wright for pitching well enough to stick around for an entire season in LA. 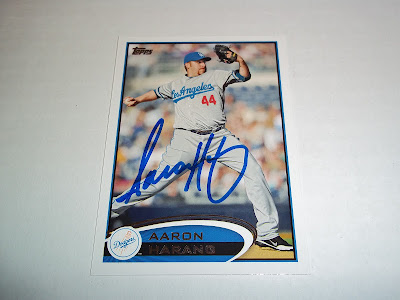 Aaron Harang has an odd looking signature.  There is no way that I would be able to tell what the blue sharpie letters on this card say without seeing that Harang is pictured on this card.

Topps was smart to show only half of Harang's frankenstein face.  His 2012 Topps Heritage card should not be sold to children. 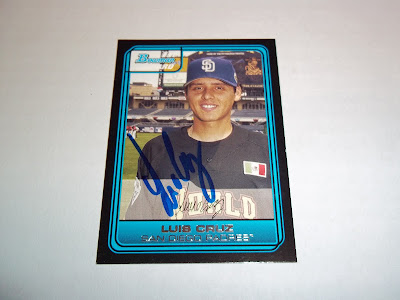 This Luis Cruuuz card that Dodgerbobble gave me was the favorite of the 12 card lot that he gave me.  Cruuuz became my favorite Dodger player of 2012.  I love his underdog story of struggling in limited time in his past big league experiences and in the minors.  Cruuuz was about the Dodgers 10th option at third base.

Cruuuz finally seized an opportunity to get regular playing time at the major league level.  He played pretty well and exceeded everyone's expectations of him.  He hit .297 with an OPS of .753.  Cruuuz also brought a flair and excitement when he stepped up to the plate.  The Dodger Stadium crowd loves this guy.

These are some great additions to my collection.  Thank you for the goods, Dodgerbobble.  I will get you a nice stack of autos next weekend.
Posted by Spiegel83 at 4:52 PM

that Harang card IS scary. I got one in a trade package a while back, and ever since, I've been wondering, "Why?"

Had no idea that Cruz used to be a Padre. Figures.

Glad you like everything. Can't wait to get my part of the trade next week!

I think the 300 number is right. I have to do a serious count of everything I got this year. Besides the cards, I also got over 50 baseballs signed, bobbleheads, books and pictures.

Dodgebobble - congrats on all those autos. nice work.

BTW - i always thought Harang looks like Chris, the son from family guy.