A Short Term Dodger Signs For Me

Luis Gonzalez is the short term Dodger that signed some cards for me through the mail.  Gonzalez played for the Dodgers in 2007.  At the time, I criticized him for his poor play.  I sit in the Left Field Pavilion for most of the Dodger games that I attend.  So, I can see how well a left fielder plays defense and I can also hear what fans are saying to that player.  Gonzalez did play some porous defense but, his play at the plate wasn't as poor as I once thought.

Luckily, the internet has given us baseball reference.com.  This site is great for looking up a player's numbers.  Gonzalez had a decent season for the team.  I take back some of the mean things that I have said about him in 2007.  I looked him up on baseball reference and his numbers were solid for a 39 year old ballplayer. 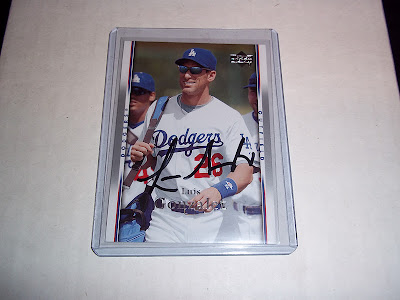 Gonzalez had a slash line of .278/.359/.433/.793 and for an older player those numbers are pretty good.  He was one of GM Ned Colletti's veteran signings.  The signing of Gonzalez wasn't as bad as some of the other old man signings that Colletti has made like Marcus Thames or Andruw Jones. 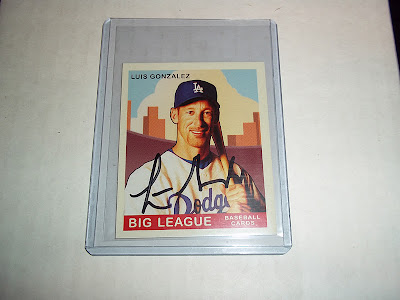 As I checked out the stats that Gonzalez put up throughout his career, I came away impressed.  I knew that he had a good career, I just never knew how well he truly was.  He is best known for hitting a walk off, World Series winning base hit to win the 2001 championship for the Arizona Diamondbacks.

Those are solid numbers.  Also, his World Series game winner was against the Yankees and Mariano Rivera.  That counts for a lot more since all the non-Yankee supporters were ecstatic when his hit that blooper up the middle.

According to baseball reference the players that he compares most to is Dave Parker, Dwight Evans, and Billy Williams.  He compares to two very good players and one dude in the Hall of Fame.  Awesome! 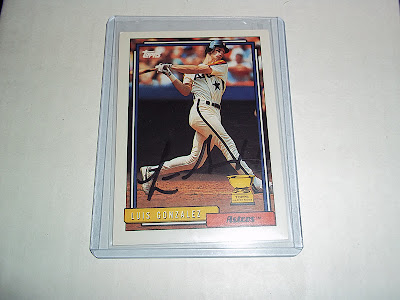 Gonzalez now works for the Diamondbacks which is where I sent these cards to get signed.  So, if anyone else wants to try him send cards to Phoenix.

This is the first time that I sent a non-Dodger card to a former Dodger.  I knew that this Astro card would come in handy.  There is a lucky Astro blogger out there that is going to get this in the mail in a few days.  That person should be happy.

Thanks to Luis Gonzalez and sorry for some of the things that I shouted to you during the 2007 season.
Posted by Spiegel83 at 2:22 PM

Nice job with your run of recent successes! You're doing a great job so far.