The month of December is a very festive time of year in every neighborhood across America.  The blog world itself is also a bit more cheery and generous.  Generosity is a strong trait that all baseball bloggers share towards one another and the kindness takes an uptick during the holiday season.  The baseball card blogs host some fun contests while giving away a sweet treat of cardboard and this spreads some joy throughout the community.

There also seems to be a Secret Santa among the blogging world around this time of year.  Names get paired up and bubble mailers get randomly dispersed throughout the globe.  Fantastic Catch organized a Secret Santa this year and I received a nice gift from a participant named Roger.  I had a good time reading some of the blog posts about the cardboard gifts that people received on Christmas.  Some cool looking cards were obtained and shown off during Christmas week.

I was glad to get this bubble mailer so I can have a nice baseball card Christmas gift to dive into. 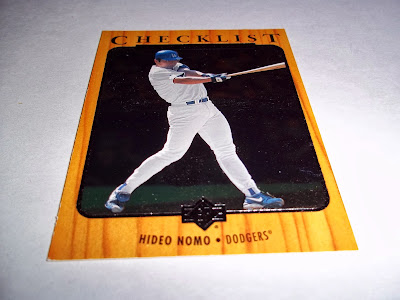 This card really stood out from the rest of the grand bunch that Roger sent my way.  A mid-90s card of Hideo Nomo batting will almost always be the big winner for "Best Card of a Bubble Mailer."  Nomo is surely cranking out a homer in this photo.  I was also probably at the game and the ball landed about five feet over my head. 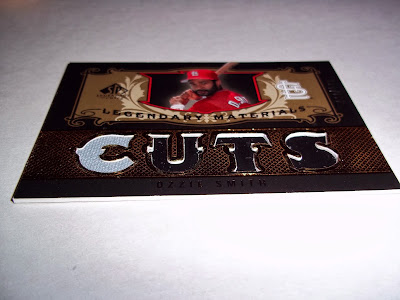 My Hall of Fame collection gets a boast!  Hip, hip hooray!  I have been really focusing my collecting habit on getting cards of the legends enshrined in Cooperstown.  This is my first Ozzie Smith relic.  I have explained in the past how I feel Ozzie is a cardboard superstar.  He is one of my favorite Cooperstown inductees to collect because so many of his cards are action packed.

I know it seems weird to bring up the high energy impact that Ozzie had on baseball cards while staring at a card of him posing the same way Little League kids pose.  Just keep in mind that this piece of jersey may have been involved in an epic defensive play or worn during a head first dive at third after legging out a triple. It is possible that this jersey was game worn.  Please just let me hope. 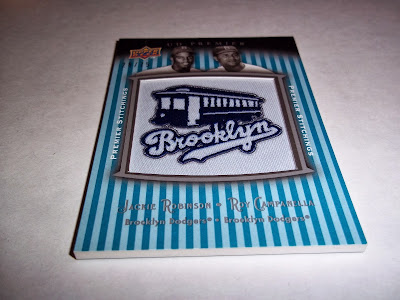 This is a very nice manupatch featuring two Brooklyn icons, Jackie Robinson and Roy Campanella.  I would actually wear this logo on a shirt or a hat.  I would even wear a shirt with this striped pattern.  I hope I have a reader that is a fashion designer and can make this happen.  You wouldn't even need and MLB licence since the patch is of a trolley and the name Brooklyn in the classic Dodger cursive.

Thanks for the cards, Roger.  It was a very kind gift with many great cards.

Roger has excellent taste. All three of those cards would fit nicely into my PC's as well. Wait... I guess that means you have great taste in cardboard. Have a safe and happy new years ;-)

Wonderful article!!! I like this website so much it's really awesome.I'm just waiting for your next update to come as I like all your posts. Daily Update Job Circular And Job News in Bangladeshthanks for share...

This is a Really Good Article. It is Amazing. Thanks for providing Unique and Latest post. Visit here Instagram Quotes

Thanks for sharing such a great information with us. Your Post is very unique and all information is reliable for new readers. Keep it up in future, thanks for sharing such a useful post.
Here Is Daily Latest Updated Mobile Price for Bangladeshi People Who are looking for mobile price all to buy smartphone. I hope you guys will be like this Mobilepriceall Website. Thanks again.

My name is Darci Lyne. This is a very happy day of my life thanks to the help that Dr. .nosakhare has given me to help me recover my ex-husband with his spell of love and magic. I was married for 6 years and it was so terrible because my husband was really cheating and looking for a divorce, but when I came across Dr..nosakhare email on the internet about how he has helped so many people get their ex back and help fix the relationship and make people happy in their relationship. I explained my situation and then I sought his help, but to my greatest surprise, he told me that he would help me with my case and that I am now celebrating because my husband has totally changed for the better. He always wants to be by my side and can not do anything without my present. I am really enjoying my marriage, what a great celebration. I will continue to testify on the Internet because Dr..nosakhare is a true spell caster. NEED HELP? CONTACT
-Email- blackmagicsolutions95@gmail.com
you can also add him on Whats-app: +2349083639501
He is the only answer to your problem and makes you feel happy in your relationship. And it is also perfect in your relationship.
you want your ex back?
want a love spell for a new lover?
Childless problem solution?
Financial problem solution?
Weak Erection & Quick Ejaculation?
solution to sickness and diseases of the body
All type of problem solution by astrology?
Divorce problem solution?

THE ONLY TRUE HACKER IN THE WORLD ® said...

INSTEAD OF GETTING A LOAN,, I GOT SOMETHING NEW
Get $5,500 USD every day, for six months!

See how it works

Do you know you can hack into any ATM machine with a hacked ATM card??
Make up you mind before applying, straight deal...

Order for a blank ATM card now and get millions within a week!: contact us
via email address::{Universalcardshackers@gmail.com}

We have specially programmed ATM cards that can be use to hack ATM
machines, the ATM cards can be used to withdraw at the ATM or swipe, at
stores and POS. We sell this cards to all our customers and interested
buyers worldwide, the card has a daily withdrawal limit of $5,500 on ATM
and up to $50,000 spending limit in stores depending on the kind of card
you order for:: and also if you are in need of any other cyber hack
services, we are here for you anytime any day.

Here is our price lists for the ATM CARDS:

make up your mind before applying, straight deal!!!

The price include shipping fees and charges, order now: contact us via
email address:::::: {Universalcardshackers@gmail.com}
Whatsapp:::::+31687835881

BEST WAY TO HAVE GOOD AMOUNT TO START A GOOD BUSINESS or TO START LIVING A GOOD LIFE….. Hack and take money directly from any ATM Machine Vault with the use of ATM Programmed Card which runs in automatic mode. email (williamshackers@hotmail.com) or WhatsApp +27730051607. for how to get it and its cost . ………. EXPLANATION OF HOW THESE CARD WORKS………. You just slot in these card into any ATM Machine and it will automatically bring up a MENU of 1st VAULT $200, $300, $400, $1,000, 2nd VAULT $2000, $3000, $4000, $5,000, RE-PROGRAMMED, EXIT, CANCEL. Just click on either of the VAULTS, and it will take you to another SUB-MENU of ALL, OTHERS, EXIT, CANCEL. Just click on others and type in the amount you wish to withdraw from the ATM and you have it cashed instantly… Done. ***NOTE: DON’T EVER MAKE THE MISTAKE OF CLICKING THE “ALL” OPTION. BECAUSE IT WILL TAKE OUT ALL THE AMOUNT OF THE SELECTED VAULT. email (williamshackers@hotmail.com) or WhatsApp +27730051607.

Am short of words for the amazing profit you helped me earn in just a week with bitcoin trading am so sorry I doubted at the beginning, I invested $200 and earn $2,500 in just one week, and kept on investing more, today I am financially successful, you can contact him via email: carlose78910@gmail.com Via whatsapp: (+12166263236) I advice you shouldn't hesitate.
He's great