The Dodgers have been playing some pathetic baseball this season.  The team got swept by the hated Giants over the weekend and are trying to salvage one game from the Diamondbacks to avoid the sweep tonight.  My baseball life has been pretty sad so far in 2013.  My collecting baseball life has been quite swell recently at the very, very least.

Aside from the Dodgers losing over the weekend, Sunday brought a shade of happiness for me.  This was just one little bright spot from an otherwise dismal weekend.  There was an autograph signing at a card shop in Whittier,CA called Harry's Dugout and it was featuring Pedro Guerrero.  Awesome. 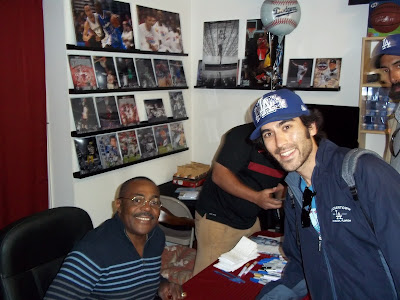 Guerrero was a beast of a hitter for the Dodgers in the 80s.  He had some 30 homer seasons, a couple seasons of an on-base percentage over .400 and a little postseason glory in 1981.  The Dodgers beat the Yankees in 1981 to win the World Series.  Guerrero was a key piece to that championship by hitting two homers in the series and taking home a third of the World Series MVP award.  Ron Cey and Steve Yeager also took home a third of the MVP award, respectively.

It was good to see Guerrro looking good and healthy.  He has had some off the field issues with drugs and I wasn't sure what his physical appearance would be.  As you can see above, Guerrero seems to be doing well and that made this autograph signing even better. 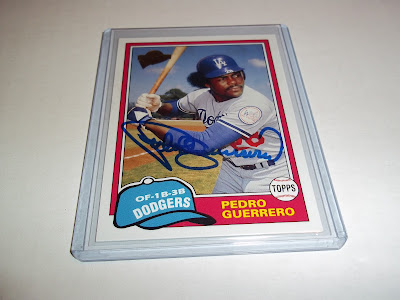 I always struggle picking out a card to bring to one of these Dodger signings.  I pick through boxes and flip through pages on the lookout for the perfect card to bring.  It gives me some anxiety while on this search and I examine the cards with a microscope.  A big fear of mine would be to bring a piece of cardboard to get autographed,  only to realize the card had a huge bend in it.

That isn't my biggest fear in life.  The biggest fear I have are clowns with red hair.  They are pure evil just like Angel Pagan.

I settled on this card because I love the retro design and I knew the signature would come out looking sweet.  Guerrero's flowing afro was also a major plus for me.

This signing was tons of fun.  I had a good time in line chatting some baseball with a handful of the local LA graphers.  Good conversation always makes waiting in line more enjoyable.

Thanks to Harry's Dugout for hosting such a nice event with a big time ex-Dodger.

i think you chose wisely with that card - it looks great. i went with his 79 rookie card when i sent to a signing a year or two ago. if i were to do it again, i would choose that fan favorites card.

Nice choice on the card, I am not a Dodgers fan as you know but that Fan Favorites with the 81 design are great cards.

Don't know if I told you but I am in the process of moving into the Thousand Oaks area. I have visited Valley Sports Cards a couple times since I have been up here. Have you checked out their big board yet? I scored some 2013 Heritage SPs and some vintage (late 60s early 70s) cards for $1 each. The board is big with the 4 major sports plus more, you should check it out if you haven't.

I agree with the other commenters, the choice of card was spot on. The graph looks really nice as well, clean and legible..

I love that card. I think you made a great choice.

It was nice hanging out with you and Franz.