I decided to go with a direct title that would let the reader know what I am going to type about and share with the blog world.  I wanted to name this epic post something more subtle in order to attempt to give mystery to this post.  Another idea was make the title a little more deceitful and then by paragraph five, spring the reader with a momentous shocker of getting to meet one of your heroes.

The title of this post deserved to be straightforward in order to catch the blog world's attention because this post is a must read for all the tens of Platter fans.  I wanted the title to pop out of your blog roll and make you check it out to share the joy of meeting Hideo Nomo.

My day started off pretty normal and dull.  I went to work early this morning thinking that I just have to make it through this day at work so I could take a nap.  Sleeping was my main priority when my first work break rolled around at 8:30 AM.

My day wasn't filled with excitement until around 10 AM when Dodgerbobble sent me a text about Hideo Nomo and former major league relief pitcher Shigetoshi Hasegawa coaching a youth league baseball game in Compton, CA.

I was kind of surprised that this event that was showcasing a quality 15 and under Japanese baseball team versus a team of top players from the youth RBI program that was being managed by one of my heroes wasn't known to me before the day of the game.  Dodgerbobble was on point with breaking this news to me. 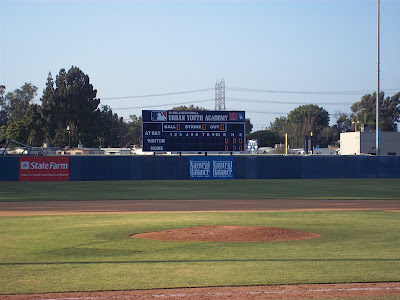 Hideo Nomo is an elusive ballplayer.  Nomo is a star with adoring fans but, he always seemed uncomfortable with all of the accolades that his pitching skills gave him.  I haven't heard much about Nomo since he retired from baseball in 2008.  I never thought that I would actually have a chance to meet him and get his autograph.

I certainly didn't ever expect to meet Hideo Nomo in Compton.  Dodgerbobble mentioning this event to me had me a little puzzled until I remembered that the MLB Urban Youth Academy is in Compton.  This field is awesome and of at least a minor league quality.  Many guys that grew up playing baseball would have loved playing on a field this well kept.  The field had well manicured grass and even major league dimensions.  Center field was 401 feet from home plate!  These kids were 15 and under and playing on this gem of a diamond.  Good for major league baseball for hooking Compton up with this field.

The grass was no doubt better maintained than the joke of a field that they have going on in Miami.

As my day progressed at work, my mind was racing with possibilities.  I knew I wasn't missing this chance to meet Nomo even though I had agreed to pick Dodgerbobble up, and drive all the way to south LA in rush hour traffic which would take me about 40 minutes even during a decent traffic flow.  I had to try and take possibly the only chance I could have of ever getting a Hideo Nomo autograph.  He doesn't sign often or make appearances.

Nothing was going to stop me from trying to meet him.

My work day was flying by and some questions were swirling in my head.  I had a full dosage of nervous excitement all day.

What if Hideo Nomo big timed me?

What if I didn't get his autograph because this event was too crazy and hectic with a large crowd?

What if I did get to meet Hideo Nomo and take a photo with him and get his autograph?

Once work ended at 130 PM, I raced home and got my autograph gear ready.  I throw a brand new MLB baseball in my backpack as well as some Nomo and Hasegawa cards just in case we can get multiple signatures.

After getting Dodgerbobble at his home, we sat in traffic for a little over an hour.  The traffic and long drive didn't seem so bad because we just began to discuss the Dodgers and for the most part, all the possibilities that seeing Hideo Nomo could bring.  While driving, I was thinking about actually getting the holy grail to my collection which is a Nomo autographed baseball signed in person!

Sandy Koufax is my other elusive Dodger that I need a signature from but that is a little more easier to get.  Koufax signatures are a lot more available since his cards pop up in Topps products.  Nomo autos aren't in many card products ever.  The Nomo auto is more rare and I watched him pitch during his whole career.

Nomo is my guy and I type on a blog named after him.  A Nomo auto was my true holy grail. 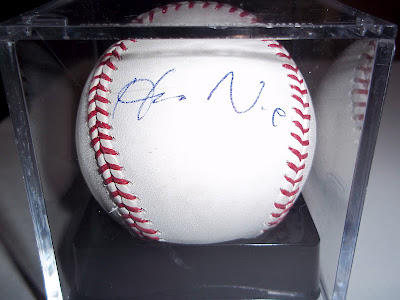 We arrived about an hour before the game was about to begin.  Dodgerbobble and I did a lap around the field.  When we got to the Team USA dugout on the other side of the field I noticed Nomo just chilling in his dugout having a conversation with his coaching staff while sitting in his Team Japan dugout.

He was so close to me.  The holy grail will be mine!  We walked over to the Team Japan dugout and sat down and talked ourselves into actually getting up to ask Nomo for his signature.  Not too many people were in the seats yet.  We may have been the only graphers in the ball park at this time.  This event was under publicized.  We had to get up off our seats and ask for his auto.

We got our baseballs and pens ready.  I shot up and leaned over the railing of the dugout and waited for a pause in the conversation Nomo was having with his staff.  Once there was a pause I asked him for his signature.

Asking him actually worked.  Nomo said, "One minute" and finished up what he was saying and signed our baseballs as well as signing for some fans from Japan that shared the joy in getting to meet a cultural icon. 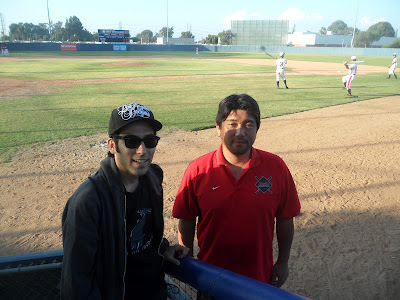 Nomo even took a photo with me!  Me looking awesome and Nomo somehow looking cooler than me.  I guess when you throw a no-hitter at Coors Field, you always look cool.

I felt a sense of relief moments after this photo was taken.  I met a hero.  He took a couple minutes of his time to make my day.

I reached the height of my collection.  I never thought this would ever happen.  It always seemed like a pipe dream.

I have to mention one thing about the actual game that was played by some really skilled teenagers. Remember when I mentioned that this field had major league dimensions.  I sat and watched this game with a group of other autograph hounds and we didn't think anyone could hit one out.  Sure enough, a kid from Japan who was maybe 5'6 and around 120 pounds, cranked a 330 foot bomb over the right field wall.  That shot amazed me and I wish I had a replay to show everyone how impressive it looked.

That kid crushed it.

Today was just one of those perfect days.
Posted by Spiegel83 at 12:59 AM

Awesome story, so random but cool

Epic. I had a great time tonight and am so happy we got the autos.

This is awesome. What a score!

Very cool, congrats on meeting your hero and it living up to the hype!

Way to go man, that's awesome! Couldn't be happier for you! The title was perfect.

Wow, man, I'm so excited for you. Congrats on meeting Nomo. Well written post here, too. It was fun to read.

dude - you're the one that crushed it. livin' the dream.

props to Dodger Bobble for giving you the heads up, also.