I strolled home a couple of hours ago after a long day working a table at a card show.  The show was held in Culver City, CA and had an old school card show feel.  The show had an eclectic mix of dealers and a steady stream of customers.  It was also held in an auditorium that probably hasn't been remodeled in a few decades.  The setting was perfect for a card show.  Good deals were to be had and it reminded me of card shows that I used to attend as a kid when events like this were a little more common.

It was certainly a buyers market.  Prices for tables were reasonable, which is why my buddy and I jumped at the opportunity to get a spot at the show.  The reasonable table prices probably kept prices low for the consumer.  Even though, I was a vendor at this show, it was good to see collectors happy at the deals that they were finding throughout the auditorium.  The show was old school and had positive vibes.

The show also was a sort of Dodger blogger gathering as well.  It is always a grand time when Dodger bloggers get together to talk some cards and some baseball.  It's also nice to get a chance to chat with some of the members of the blogging community and helps you put a face and personality to the words that you read daily.  I got to meet Ernest from Dodgers Blue Heaven and he made an awesome purchase which I won't spoil in case he wants the honor of showing it off on his blog.  Jesse from Los Angeles Inspiration was also in the house having a good time and buying some really nice looking cardboard.  Those were a couple of my fellow bloggers that I got to spend time with this afternoon. 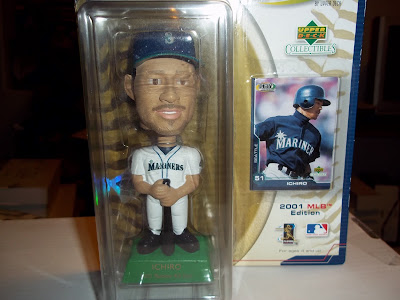 Culver City's favorite son, Zakwin was also in attendance at the card show.  Zakwin runs the famous, Plaschke, Thy Sweater is Argyle blog and he brought me some presents.  Woo!

I had given Zakwin a baseball at the Dodgers Fan Fest earlier this year so,he could get it signed by rookie of the year candidate, Hyun-Jin Ryu.  I told him to just get me back later the next time we met up.  He came through big time today.

He handed me this sweet looking Ichiro bobble head that comes with a baseball card.  I am so tempted to just pop this sucker out of the plastic and display it in my room.  The card itself will also fit nicely into my Ichiro binder which has soared to almost 250 cards. 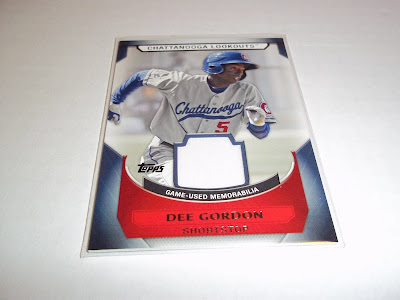 Not only was the Ichiro bobble given to me but, Zakwin also handed me a stack of baseball cards.  One of the cards that was in the team bag was this Dee Gordon card with a piece of his minor league jersey in it.  I have the Jerry Sands version from this set and am happy to now have the Gordon to go along with it. 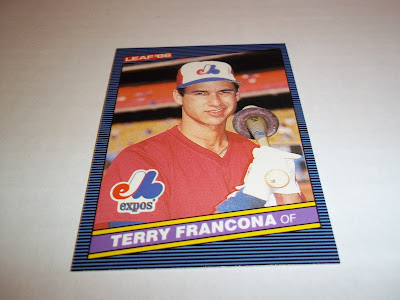 A fourth Doyer blogger that I got to chill with today was Oscar from All Trade Bait, All The Time and he brought some cards for me as well.  Double woo!

Oscar and I had agreed upon a trade after he posted up some old Montreal Expo cards on his blog.  He had a couple cards that interested me and a swap was established.  I set aside some Dodgers and hall of famers for him.

The Expos uniform has to be one of the best of all time.  The hat was awesome and the red, white and blue color scheme always looks spiffy.  Montreal deserves to have a team again just so these uniforms can come back and grace the front of some nice cardboard. 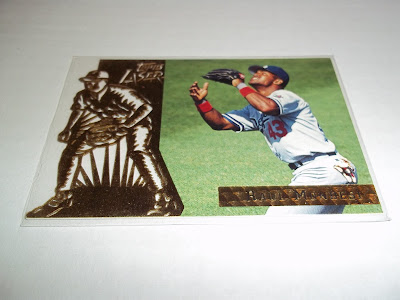 A vendor at the show was practically giving away high end mid 90s packs.  The vendor was selling some Upper Deck SP, Topps Finest and Topps Laser.  I was very tempted to buy a bag full which some other folks at the show had done.  I show restraint at this show and only spent a dollar on a card.  My goal was to keep money and not spend it on more baseball cards.

My restraint paid off as I left the show with a pocket full of cash and Oscar had included this Topps Laser Rauul Mondesi in my trade stack.  Getting this card was just a little extra icing on a fun day.  I had made my money back plus some and got some items from members of the blogging community that fit into my collection.

It was a great time seeing some of my blogger buddies.  I look forward to the next show or game where we get to hang out again.
Posted by Spiegel83 at 9:19 PM

woooo! it was a fun show, can't wait for the next one!

I was great to finally meet you and put a face to the blog.

Same here dude. I had a blast at the show.

I like that Francona card myself because of the old-time donut on the bat and old-time Dodger Stadium in the background.

Sounds like you had a good time, congrats. And coming from someone who used to do shows in the 90's, that is the toughest part about shows...not spending all the money you make on other tables.

Sushi is probably my favorite type of food. It usually just cost too much for me. I only go about once every 3 months or so or when there is an event like a birthday party. http://www.pinkrice.com.au/